Start a Wiki
Amnesia was originally a Japanese visual novel series by Idea Factory. It was first released on August 2011 for PlayStation Portable, and then a sequel (called 'fan-disk' in Japan) Amnesia Later was released on March 2012. Another sequel titled Amnesia Crowd was released on 2013. The series was well received in Japan, so it has a lot of related merchandise released, such as Drama CDs, Character music CDs, books, etc.

Amnesia is classified as an otome game which means the player takes the role of the main female character who can choose from a variety of male characters as her 'love interest'. However, in Amnesia, the male characters that the female player character can interact with are based on the symbolic suit symbols from a playing card deck with the following storylines (commonly known as 'routes') in the game: Heart, Spade, Diamond, Club and Joker. Depending on which route you pick, your relationship with each character is different. After picking a guy, the heroine will be in a world where the chosen guy is the boyfriend.

On one fateful day, August 1, the heroine lost all her memories. In order to gain them back and to ease her pain in remembering, she tries to interact with 'him' hoping to live each day as happily as she can, and to make a bright future with him... 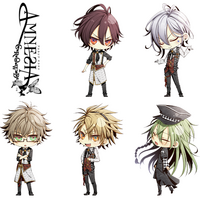 Retrieved from "https://amnesia-anime.fandom.com/wiki/Amnesia_(game)?oldid=7276"
Community content is available under CC-BY-SA unless otherwise noted.