Start a Wiki
Kent is a university graduate and best friends with Ikki, Kent calls him by his full name 'Ikkyu'. He is voiced by Akira Ishida in Japanese and Tyler Galindo in English.

Kent is very tall and has light brown hair that is tipped with green, and styled messily. Kent has green eyes, and wears thick black half-framed glasses. He is usually seen wearing a black long coat with buckles all over the left side of his body. Over the right part of the chest area are green clover decorations. His clothing usually consists of green and black color combinations.

Kent has a very intellectual mindset, which is also reflected on his friendships and relationships with others. He is very kind and interesting. Many times, he will ask someone to rephrase themselves in a more intellectual manner so he can understand them more clearly. He often sends the Heroine text messages mainly containing 'good night' and 'good morning'. He does not know much about dating, and goes about dating her in a very analytical manner, but his feelings for her are very sincere. He tends to forget about events he has no interest in, but tries his best to make the heroine happy. The heroine told Kent to promise her one thing- to go to the temple festival when they first started going out. Although their way of dating isn't conventional, they enjoy spending time together. Kento notices something is different about the Heroine, when she brings him coffee instead of mocha to his workspace. He tells her she has lost her memories, therefore causing her to act strangely. Orion tells Heroine that it's okay to tell Kento the situation, so the heroine explains how Orion is attached to her being. Kent and Orion have a conversation, using the heroine as a means to do so, Kento records it on paper. Kent is the first person other than the heroine to interact with Orion. He understands that she is shifting between parallel worlds. Because of his relationship with Heroine, Kent realizes that expressing his emotions are important, and begins to treat her with more care and show more loving affection.

Kent is a graduate student in mathematics. He enjoys creating math puzzles and observing things. He has a very analytical way of thinking.

He likes every type of animal because he enjoys observing them all.

His favorite food is minestrone, and his least favorite is crabs and chestnuts because he finds them hard and cumbersome to peel.

His symbolic route in the game is the 'Club'.

Kento as he appears in the anime. 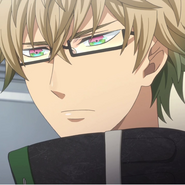 Kento smiling.
Add a photo to this gallery
Retrieved from "https://amnesia-anime.fandom.com/wiki/Kent?oldid=8532"
Community content is available under CC-BY-SA unless otherwise noted.