Toma is a second year law university student and is childhood friends with Heroine and Shin. Voiced by Satoshi Hino in Japanese and Christopher Ayres in English.

Toma has short, dark yellow hair that is tipped with a little bit of orange at the ends with a black head band with orange diamonds at the top. He wears a feather necklace around his neck. He wears a black and orange, striped shirt with a black, short-sleeved jacket. Around his waist he wears a yellow scarf. He also wears black, tight jeans, a silver belt with a checkered pattern on it, and a pair of black shoes. His eyes are a combination of dark green on the top, orange on the bottom, yellow in the middle of the orange, and a round, black pupil.

Toma is very kind but can be overprotective at times. He shows signs of being a Yandere. Due to all the bullying by Ikki's fangirls, Toma gets increasingly paranoid to the point that he cages the heroine so that she would not get hurt. He deeply cares for her both as an older brother figure and as a lover.

Toma was a childhood friend of Heroine along with Shin. This changed when Heroine woke up in the Diamond Arc without her memories and asked him if he was her boyfriend. Toma took up the responsibility to protect Heroine.

His symbolic route in the game is the Diamond route.

- In one route, Toma was the heroine's stepbrother when his mother married her father, but later divorced.

- He has many hobbies, including basketball, surfing the net, cycling, reading and cooking

- He likes spicy food, but doesn't like raw fruit.

- He was in a variety of clubs, including broadcasting, soccer, archery and newspaper club.

- He finds humans to be his favorite type of animal. 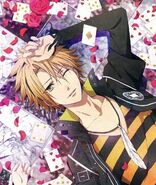 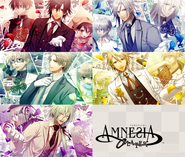 Add a photo to this gallery
Retrieved from "https://amnesia-anime.fandom.com/wiki/Toma?oldid=8418"
Community content is available under CC-BY-SA unless otherwise noted.