Ukyo is a famous photographer with a split personality. He is voiced by Kouki Miyata in Japanese and Patrick Poole in English. Also he is Heroine's real boyfriend in the real world.

N is a tall and youthful looking man. He has long pale green hair that becomes darker at the ends, and he has green eyes.  His bangs fall freely over his face, down to his cheeks, and there is a long braid on N’s right, held together using a white hairband. He typically has a solemn expression. However, when overcome with his more maddened and twisted personality, N develops dark lines under his eyes and he tends to grin very widely.

Over his head, he wears a black hat with a short brim. On the tip of the crown is a white streak. The band around the crown is patterned with black-and-white diamonds. He wears a wrinkled, somewhat unbuttoned brown shirt with a long, black necktie loosely tied around the collar, of which there is a silver pin down the middle. Over this, Ukyo dons a long-sleeved, black jacket left open. On his right, near the shoulders, there are three square-shaped silver studs attached to his jacket. Likewise, on his jacket's left, there are also square-shaped silver studs running down vertically. N entire left jacket sleeve is patterned with black-and-white diamonds and a similarly-designed patch of cloth is designed on his right side, below the collar, placed parallel to the three studs on the other end. On his patterned sleeve, there is a black cloth wrapped around his upper bicep. Around Ukyo's waist is a black skirt with a diagonal cut, leaving it somewhat short on its left. On the right, there are also three square-shaped silver studs pinned near the cloth's line. Over this, there is a long, cape-like cloth hanging over the back of his legs, styled with the longer end stretching diagonally towards the right. It is black with a lavender inner lining. Underneath it all, Ukyo wears tight black pants over heeled black shoes.

N has shown to have some feelings for Heroine. He is rather kind to her, but his alternate personality is villainous and menacing. His split personality is due to witnessing the death of his girlfriend, Heroine, many times in his attempts to save her, thus creating the personality built from his brokenness and also his will to survive. He is extremely kind, loyal, and loving, to the point where he gives up his life numerous times in order for his wish of wanting Heroine to stay alive to be granted, yet to no avail. N also has seemingly little regard for his own life, keeping his life relatively simple and adjusting his life to his switching personalities, such as keeping diaries to write to his other self. In order to keep his other self from running wild, he sleeps in the open where people can find him. His other self(also known as Ura N) turns out to be much more practical and streetsmart than Ukyo, caring for N’s well being and household chores, often berating him on his lackadaisical attitude via note. After the events of August 25th, it is suggested that over time, the two personalities might converge.

Ukyo has a passion for photography, and is famous for his photographic work.

He has various hobbies depending on his personalities. Regularly, he likes to braid his hair and strike up conversations. His other self prefers to do housework.

He has joined many clubs in school, including triathalon, cheerleading, kabaddi and dance.

His only known living relative is his grandmother.

Ukyo has no preference for food, but his other self enjoys pudding jelly and dislikes burdock, nori (dried seaweed) and raw egg.

When he comes to dine at the Meido no Hitsuji café, he always sits at Table no. 8. He is a regular at the café.

N’s symbolic route in the game is the 'Joker'. His route contains 1 good ending, 1 normal ending, and six bad endings. 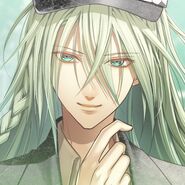 "You're going to be killed!" 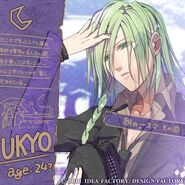 Ukyo-KnifCry.jpg
Add a photo to this gallery
Retrieved from "https://amnesia-anime.fandom.com/wiki/Ukyo?oldid=8733"
Community content is available under CC-BY-SA unless otherwise noted.